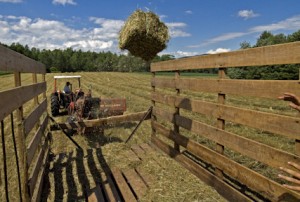 I love to help Roger (the farmer) hay. Sometimes I drive a tractor around in circles over the cut grass fluffing it up (called tedding) (no, I don’t know why), sometimes I catch bales in the hay wagon and stack them (a wagon holds more bales if they are stacked neatly) and sometimes I unload the hay wagons, one bale at a time. And, sometimes I just stand around and take pictures too, but not often any more. I would rather jump on a hay wagon then stand back and not participate.

Today I was in the barn unloading hay wagons. I caught and stacked bales for a time as well but mostly I unloaded the wagons. There’s an opening in the back wall of the wagon where bales can be tossed through or carried that is maneuvered over the bale conveyor. One bale at a time the conveyor chugs the hay up and to the back of the barn where Roger stands and throws them into the still empty spaces. 170 bales on a wagon, the racket of the conveyor, working in the heat and shadows of the old heifer barn, arms tired, heart full.

I don’t know why I like doing this so much.  Maybe, when I’m riding the wagon, it is the view over the Valley of Vermont and across the distant fields that quilt the horizon. There are crows to watch as they hunt the new short grass territory and swallows to envy as they strafe the fields. And there is the sun and sweat and ache that makes me feel old and strong at the same time.

If I were pressed I would say that it is most likely the feeling of community and companionship I get whenever I help Roger. I’m part of something bigger, something with a long history and a future that I am helping ensure. Two friends tossing bales on a beautiful August day, an afternoon in the fields amongst the birds and views and 600 bales in the high heifer barn.