This is about as lazy as I can get and if I put my mind to it I can get pretty darn lazy! 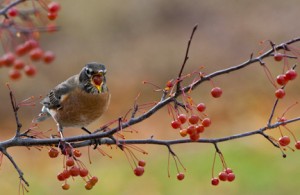 So here is the situation- For the past several weeks I have noticed all kinds of birds coming to the crabapple trees in my front yard eating the ripe fruit. When I first noticed all the activity I saw warblers, woodpeckers, flycatchers and thrushes in the trees. There was so much activity that it would’ve been hard not to notice. In fact, the three trees are right in front of my house and I walk and park by them every day. But I was so busy doing workshops that I didn’t have any time to do any photography.

I finally got a chance to try to photograph the birds a couple of days ago. By now most of the birds that I had seen previously had migrated through but there were still robins in the trees. Not just one or two robins but up to a dozen at times. But how to get close and not spook them?

My friend, Jeff Wendorff suggested I use my car, a Toyota 4Runner, as a blind. So I put the back seats down, lowered the back window and set up my tripod with my Nikon 200-400 facing backward out the window. I was still several feet inside the car so I was invisible to the birds. I then backed up the car about 20 feet from the tree with the best background, crawled in the back and waited. 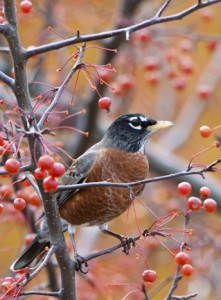 It really doesn’t get much easier than this. As soon as I got in the car robins started showing up. At times there were 5, 6 or 7 robins in the tree, moving around, gobbling up the berries, posing nice as can be. As soon as one or two left another one or two flew in. There was constant activity so there were constant opportunities for pictures. I would’ve like a cleaner view, there always seemed to be something in front on a bird, but I liked what I got. The bright orange color in the background of the vertical shot is from a sugar maple 40 feet behind the crabapple tree. 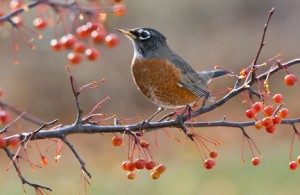 Thanks, Jeff for suggesting my car as a blind. It certainly is my kind of blind…cup holders, radio, CD player, power windows, 4-wheel drive. I wonder where else I could park and photograph?