Home > Blog > Articles > A Cloud Story for you

A Cloud Story for you

A Cloud Story for you 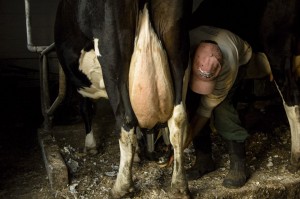 I walked into the barn the other day and Rob, Roger’s youngest son, was standing in the center aisle waiting for a cow to finish being milked. Rob is here full time now and he often takes over the morning milking allowing Roger to do other, long put off jobs.

“Yes sir?” Rob is ex-military so just to annoy me he acts all official every so often.

“It’s going to rain this afternoon.”

“It’s supposed to start around 4.”

“Now why would I need to have my phone tell me what the weather just was? Why, when I was your age we used to call that memory- we used to be able to remember what just had happened to us.”

“Not these days! You don’t remember anything anymore. Everything is in the cloud.”

“The cloud? The computer cloud? Everything in the cloud? No more remembering?”

“Nope, no need, everything is in the cloud.”

Roger walks over and being the general snoop that he is but only hearing half the conversation he asks, “What’s this about the clouds?”

“That’s where everything is these days, Roger”, I say only half helpfully.

“There is only one cloud?”

“The cloud. That’s it? Not a cloud or the clouds? Just the cloud?” He pauses, his brain madly conjugating.

“Well, how do you know which one it is?” Roger asks thoroughly puzzled as he takes off his cap and scratches his scrawny head .

“You don’t have to, it’s everywhere” Rob interjects even less helpfully.

“There’s clouds everywhere and that’s where everything is. Is that what you are telling me?”

“Yep” Rob and I chorus together.

“Do you think there are cows in the clouds?” Roger asks, getting back to his familiar mischievous self.

“You have put cows in the clouds? Huh, do you think any of them need milking?”

“Because these next four sure do and they are standing right here!”

Roger turns and starts to walk away laughing and muttering to himself. Shaking his head he stops and turns back to us saying, “The old man must be turning over in his grave right now. Hugh would never believe there were cows in the clouds.”

“He doesn’t have to believe now, Roger,” I say as reverentially as I can. “He can probably see them from where he is sitting.”

“Now wouldn’t that be something, seeing cows in the clouds. Do you think he is seeing two guys working as well?”

Parting company, Rob quickly steps forward to tend to the milker and I head for the shovel to start the stall clean-up.

“It’s a good thing one of us remembered something this morning,” Roger says. “The only things in the cloud around here are your heads!”