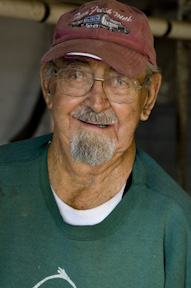 But bear with me a moment, I might change your mind. You have all the photographic skills to photograph people. Taking a picture of a person is no more difficult than taking a picture of an elk or bird or dog or flower. Control the background, find nice light and don’t annoy the subject and, voila, you have a nice people picture.

The skill you lack as a nature photographer are those pesky social skills that allow most people (those other than ax murders and nature photographers) to interact with their fellow kind in a genial, non-threatening manor. This gap in our development in large part explains why we do what we do; we would rather be stuck in mud than at a cocktail party. And don’t argue with me, you know it is true!

This is how I felt about taking pictures of people. I took them because I had to for my various projects but they were at best serviceable. Then I started teaching with Bob and Nevada and I was forced to admit that my people pictures were dreadful. They all looked like I took them secretly peeking out through a drawn curtain or cleverly as I walked by so no one would notice.

One reason Bob’s and Nevada’s pictures are so good is because they get great access to people, they make them relax and they are accepted right away. This is in large part because they are Bob and Nevada. Bob, with his goofy hair and overly friendly face, is about as threatening as a Labrador retriever puppy and Nevada, with her blazing blue eyes could get you to do just about anything, anytime, happily.

I, on the other hand, am burdened with the face of a mutt and the personality of a cold sore. Not the best combination when you are trying to gain the good will and take a picture of a stranger. So what is a fella to do?

The first rule is to take your time. Find a potentially photogenic subject and then just chill in their vicinity. Sit on a bench, lean against a wall, have a beer, daydream, whatever. Just do nothing. You can hold your camera but you can’t use it. You are trying to be part of the scene, not a photographer on the prowl. In 15 or 20 minutes you will be invisible and no one will think of you as the odd, potentially murderous stranger. Then you can take out your camera and slowly begin to move around the area taking pictures. While you are doing this don’t approach your subject with your camera up and your face hidden behind it. People respond to faces and eyes and smile, none of which can be seen if you are hold up your camera as you move around. Be sure to stop and hang out some more as you are starting to take pictures. Eventually, you will gain the trust of whomever you are photographing and they will relax. That is your goal; to be so ignored that you are invisible while you are photographing and your subject is relaxed.

The second rule is to make sure the pictures you take are good ones. This involves thinking ahead of time about the light and the background and the perspective from which you are going to shoot. It also involves making sure your camera is set correctly and that all the gear you need handy and ready to go. The last thing you want to do is fiddle with your gear while your subject is getting antsy.

The first pictures I took of the Bromleys for my farm book project were almost nauseatingly bad. I was using a 70-200 zoom so I could stand far away and the pictures looked more like mug shots than intimate portraits. As time went by and the family became used to me my pictures started to get better but they still weren’t great. 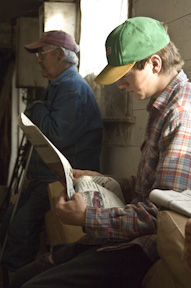 The reason for this is that even though they accepted me taking pictures, I was projecting my own ill at ease about photographing them on to them. As soon as I stopped thinking they were uncomfortable because I was my pictures improved dramatically. I realized that they didn’t mind having their pictures taken. If they didn’t mind, why should I? It was then I started getting the pictures I wanted by using wide-angle lenses and getting up close and personal. This was when my pictures finally took on a Krist/Weir look.

So give it a try. Go out and find some people doing something in nice light and have a sit, a good long sit. You could even try talking to them. Not about photography, about them. Everyone always loves talking about themselves. Shine a little spotlight on what they think is their ordinary life and you will find a very willing subject most of the  time. Then take your camera out and slowly start taking pictures. Your images will be much better and the experience will be much more satisfying.

Of course, you could always get a goofy haircut or electrify your eyes.