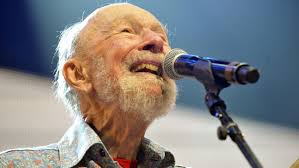 Pete Seeger died the other day at the age of 94. Long thought of someone who’s time had past, Pete, in fact, remained relevant in  folk/traditional music and the environmental community up until his last days. And Pete remained relevant and important to me as well. I say Pete rather than his more formal full name because I knew him;  he and I once shared a microphone, well, actually four microphones, on stage in front of hundreds of people. I know, hard to believe but true.

Back in the 80’s I taught for the National Wildlife Federation at their family summer ‘Summits’. I mostly taught birding with my good friend Art in one week sessions in Colorado, Washington, California, Montana, Maine and New York. One week a night to keep the 600+ attendees entertained Art, my former wife Barbara and I would put on a folk music concert for the crowd- Art was a talented guitar player and singer, Barbara had a beautiful voice and then there was me. My singing range was about four notes but I played an okay guitar and I could tell a story or two (surprise, surprise!) but my talent was playing the autoharp, held high against my chest, my left hand on the chord bars, my right madly flying across the 36 strings. We did a lot of sing-alongs and some new folk songs, told some jokes and generally had a fun time. The audience didn’t seem to mind it either. We even got the occasional encore although no recording contracts. 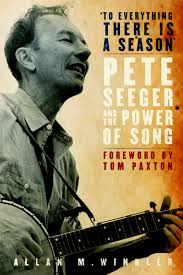 The time the Summit was in the Adirondacks Pete Seeger and his Clearwater coalition was in the area and they agreed to put on a performance for the Summit a couple of days after our evening of music and mirth. Pete Seeger was larger than life to me; the writer of many iconic songs- Where Have All the Flowers Gone, If I had a Hammer, Stuck in the Big Muddy, Turn, Turn, Turn – and a man of concrete principles who fought actively for equality and freedom and peace often to his own personal  detriment. I knew many of his songs and I had most of his albums. I even had his How to Play the Banjo Seeger Style instructional book.

The evening of the performance Pete somehow finds out about our little concert and asks if we would join him and his group up on stage for the concert. He had brought 10 other singers and musicians along with him but he thought more would be merrier so he asked us and I said, without thinking (surprise, surprise!) sure, why not? I mean, what are the chances of me saying no to Pete Seeger?

There are a few behind the scenes things you need to know about all this. 1. I didn’t really know all his songs and the music was often way beyond me because I didn’t then and still don’t read music. All the songs I have ever learned were by ear and by trial. 2. The autoharp I was using was a special diatonic autoharp. Diatonic means that the autoharp is tuned to play in only one key. I now know that there are many musical keys that most instrumentalists know how to switch between them. Not me. I played in the key of D and that’s it.  Don’t confuse me with details. 3. Pete by this time was in his late 60s and his voice and dexterity on the guitar were not what they once were but he was also a proud man who didn’t embrace his loss of musicianship gracefully. He wanted to be up on stage, guitar in hand, singing away and he wanted his traveling band of singers and musicians to either drown out or make up for gracefully any lack of sound he couldn’t produce. 4. Did I mention that I didn’t really know all of his songs and had no clue about most of his instrumentation? Just wanted to be clear about this. Narry a clue.

So there we all were backstage waiting for the curtain to go up, Art studiously trying to learn the songs we were about to perform, Barbara studiously trying to learn the lyrics we were about to sing and me studiously staring at Pete Seeger, in awe that I was about to go out and share the stage with a legend. The curtain goes up, the audience applauds, I see four microphone stands and off we all go front and center. Or I should say, off the other 12 went to three microphones  and off Pete and I went to the last one. I didn’t have much choice actually it was the only space availible and really, what was the worst that could happen? 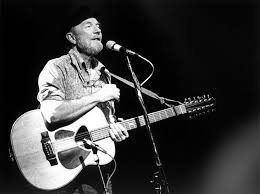 The microphone stand that Pete and I shared had four mics- one each for our voices and one each for our instruments- Pete’s with his banjo and guitars and me with my lone, key of D autoharp. The first song comes up and Pete starts singing and playing nice as could be but I didn’t know the words and I only knew the chords of the chorus of the song. No problem, I just moved my mouth silently pretending to sing and moved my right hand just above the strings pretending to play until the chorus came around and then I gleefully added to the music. The song finished, clap, clap, clap, and off we were to the next. Hey, this is kinda fun. Art and Barbara were not quite as at ease being conscientious types but that was their problem, I was sharing a mic with Pete Seeger!

The second song comes up and Pete apparently decides that he is going to take a little break so he sings but this time he plays air guitar while I, knowing the words, sort of, but not the chords, sing but don’t play. The song finishes, clap, clap, clap, and off we were to the next. This is a breeze! The next song comes along and I have no clue how to play it and have never heard the words. As soon as the song starts Pete apparently feels the same because he too declines to sing or play. Both of us look like we are having a great time, our lips moving, our hands flying but no sound is being produced. I have never played air autoharp with such skill and nuance and my command of folk song lexicography has never been better. Pete and I were magnificent!

The night was a huge success. Clap, clap, clap, encore, encore everyone went home happy. Everyone, that is, except the poor sole working the sound board. The sound board is where all the mics are mixed to send the best sound to the audience. I looked down at the mixer sometime in the middle of the concert, the man was in a panic- his hands flying across the board, his lips moving madly as he both cursed and cajoled the equipment to make a sound, any sound. He didn’t know about air singing or air playing- he thought Pete and I were actually making noise. To him sometimes the mics worked and sometimes they didn’t. He didn’t know there was a sometime air guitar and most times air autoharp hooked up to air mics on stage and there was an air sound board in front of him.  And there was nothing I could do. I was sharing a microphone with the Pete Seeger, and if it was good enough for my buddy Pete, it was good enough for me. Besides, who was I to rat on a legend?