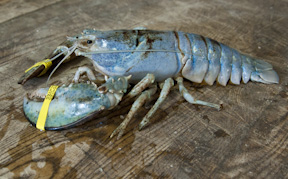 I was in Gloucester last weekend riding lobster boats and looking for shots. I’ll include some of the pictures in the upcoming blogs. For now let me show you this very unusual blue lobster. I found this guy when I walked into a lobster processing plant and started asking questions and generally annoying people. Probably as a way to get me to go away, they showed me this blue lobster.  They said it was the first blue lobster they had seen in over 10 million pounds of lobsters!  Now that is rare! It looked like it was made out of porcelain. I suspect it is still there but I’m not telling where. They were bothered enough by me!