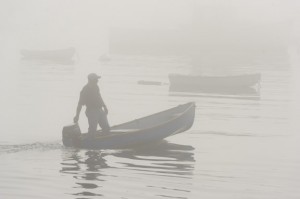 Most of the time when I am out taking pictures I am shooting a single frame at a time. This is because I am taking my time, waiting for just the right moment where the wind, and light and subject all conspire to give me the best that I can get. But there are times when instead of being so deliberate I am just the opposite- I shoot in short bursts of 5 or 6 images. I do this whenever I am photographing something that is moving and whenever the expression of my subject is important.

Shooting on fast motor drive for a second or two allows you to concentrate the subtle differences between each shot when you are reviewing your images and pick the best one from the series.  Now, let’s be clear about what I am saying. I am not recommending to just blast away and see what you get. I am recommending that when the situation is right you take a burst of shots.

The reason this technique works is because the subtle differences of gesture and expression- how high the hand is, how far the head is turned, the separation between the arm and the leg, the openness of the eye, the curl of the lip, the cock or the head- can be the difference between a nice shot and a great shot. Just be sure to toss away the inferior images and keep only the best ones or else you are going to be swamped with shots you will never ever use. 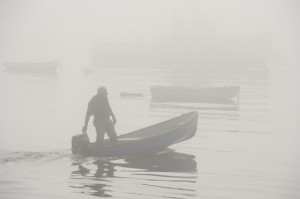 On the example I have included here I saw the lobstermen heading out to his boat in the fog and saw that there was a brief window in which he would be nicely framed by the boats in the background. I took a total of 8 shots. In 6 of those shots the lobstermen’s head or arm was turned is such a way that the composition suffered. In the shot I selected, the lobsterman’s head was up and turned so I could make out his face and brim of his hat and his right arm was not merged with his right leg.

I saw none of this while I was taking the burst. I was just trying to keep my autofocus bracket on the lobsterman and watching the background so I would stop shooting when the boat merged with the background boats. The differences were noticeable when I was looking at my images on my laptop. That was when I was glad I had several shots from which to choose.

Shoot short bursts when things are looking good and subtle differences might make a huge difference. You’ll be glad you did.