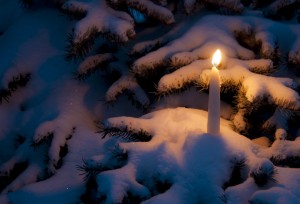 Yes, sometimes I take requests. This one was a ‘holiday shot with a candle’ (I think). I just remember the candle part (I didn’t say I pay attention to requests!) “I need a shot with a candle in it.” I thought of the tree and snow.

So I waited for a still morning just before sunrise (twilight- when details are visible but softly so) after an all day snowstorm so I would have fresh snow on the spruce bough. Then it was just a matter of placing the candles, lighting them, waiting for the flames to be vertical (sideways flames look funny) and taking the shot.

Here is the test question- how did I figure out the exposure? If your first thought was something along the lines of “well, you could meter the flame…” then you need to embrace the camera technology of this century. Put your camera on aperture priority, pick your f-stop based on how much depth of field you want and then blast away! Camera meters are so sophisticated these days that even something as difficult to expose as a single burning candle is not a problem.

I could get the same results in manual exposure mode but it would take me longer, I would miss some shots and that part of my small but perfectly formed brain that is thinking about exposure would not be thinking about composition or the quality of the light or wondering if I had any chocolate stashed in my car. All of these things are more important than manual exposure. Shoot in aperture priority and simplify your life.