Home > Blog > Articles > From out of the Clouds…

From out of the Clouds...

From out of the Clouds… 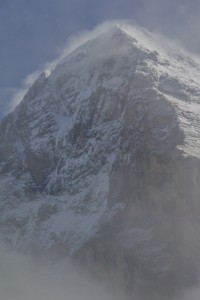 Sometimes everything works out. Not often, certainly not every day but sometimes, every once in a while, the Gods shine down upon you and the heavens open and….

And so it was in the Berner Oberland in Switzerland a week ago. I had three days in this high Alp paradise to see the mountains, three days to see, in particular, the mountain that as a boy I had read about and been entranced by- the Eiger. For those sane souls who are not familiar with the Eiger it is one of the most well known and most terrifying mountains in the world. It’s 5000 foot north face is both notorious and deadly and as a boy just beginning to experience the joy and wonder of mountains the Eiger filled my head with both nightmares and awe. I read all the books about its climbing history, studied the maps and slowly accumulated gear that might someday take me to the top. That never happened but I knew the names of all who had first conquered her terrible north face and they became my adolescent climbing heroes. The Eiger is a big, big deal to me!

So when after the second day of heavy clouds shrouding the mountains I had begun to resolve my fate. And then on the last afternoon, on the flanks of this famous mountain of my dreams, she lifted up her skirts and revealed all! There is was, the north face! I could see the entire original climbing route- the first, second and third ice fields, the famous ramp, the buttress, the site of the death bivouac. And there above them all, the notorious and evil white spider, the crux of the climb and the site of many terrible climbing accidents. I was transfixed.

Not so transfixed that I didn’t take more pictures than I would ever possibly need. Verticals, horizontals, landscapes, tight shots of the face- I kept on shooting. I think it was just an excuse to continue to stare at her. Did I get enough? Of course not! I would go back in an instant.

And as I sat there all the names of the early climbers came tumbling back to me as did their stories. I can’t remember what day of the week it was but I can tell you vivid stories of Henrich Harrer and Herman Buhl and Gaston Rebuffet, stories that I hadn’t read, names that I hadn’t uttered in 40 years. What a glorious afternoon! What a magnificent mountain!

The Eiger! Still the mountain of my dreams. 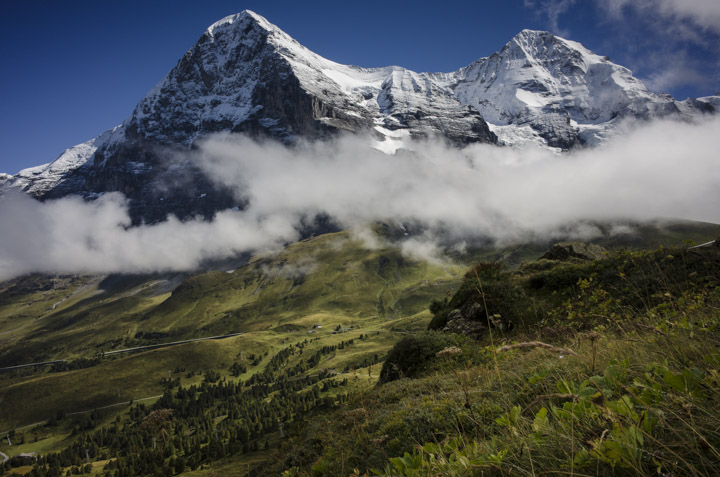