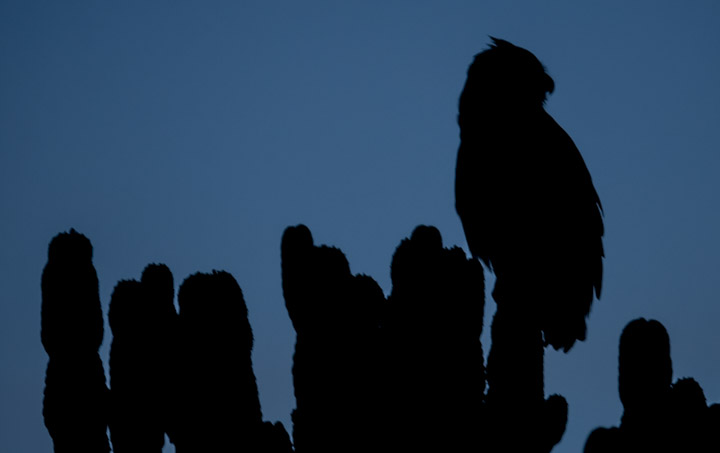 “Okay, I get what you wrote about hand holding a telephoto lens when photographing in the daylight- widest f-stop, highest useable ISO, brace if possible, shoot a burst- but how did you get the shot of the owl in the dark? Still hand held?”

Yupper! Still hand held. The reason it is hand held is pretty simple- I didn’t have any other choice! I didn’t have time to get out my tripod and I wasn’t allowed to stand outside the vehicle at that location. If I wanted to get the shot I had to hand hold my camera. I used my Nikon D4 and the new Nikon 80-400. I cranked the ISO up to 3200 (the highest ISO I am comfortable using. I have shot ISO 6400 before but it begins to get pretty grainy limiting what I can do with the image), opened up to f5.6  (the most open f-stop at 400mm), used aperture priority (to ensure I would get the fastest shutter speed for that combination of ISO and f-stop), dialed in -2 auto compensation (to boost my shutter speed even more) and shot several long bursts.I composed big to include more sky (more light) and then I did a small crop to get the final image. I ended up photographing the twilight owl at about 1/20th of a second. 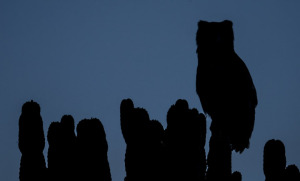 The other thing I did was ask our guide to turn off the vehicle and then ask my companions to stop moving. I wasn’t positive that I got the shot. It looked pretty good in the back of my camera but when I down loaded the shots into my computer only eight of the 40+ images where acceptably sharp and of those only three were pretty good. None of the pictures of the owl are absolutely tack sharp- I can’t make a 16×20 enlargement of the owl- but the three best are sharp enough for the presentations I do, my blog posts, my website and for marketing images. I’m also pretty sure I can make a very nice 8×10 print of the image.