How cold is it?

How cold is it? 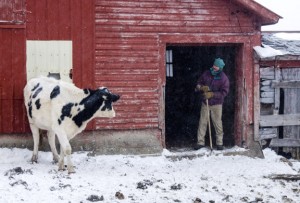 On the farm we never say it is cold, it gets too redundant. If it is November, December, January, February or March chances are it is cold. We only comment on the weather when something unusual happens- a hurricane comes through, a tornado touches down, cats and dogs drop from the sky, etc, etc, etc. In winter we only mention that it is cold obliquely, we never actually say it is cold. I think if we actually admit it is cold than we also admit that it is a long way from being warm. So how do we acknowledge that the temperature is a wee bit low?

We say “It is a bit brisk” when the temperature gets down into the 20’s- really hardly worth mentioning.

We say “It is brisk” when the temperature is in the teens- noticeable but barely. We’ll put a vest on (mostly for looks).

We say “It is fresh” when the temperature is in the single digits but only when the wind is blowing. Otherwise we go out and cut wood.

We say “It is a bit fresh” when the breeze kicks up in the minus single digits and ears begin to get chilled. We will zip up jackets at this temperature.

When it is actually cold we say “It is some fresh” but only when the temperature drops down to the minus teens or below and the wind is howling. We only say “some fresh” when we are inside  because it is so cold, er…fresh outside that the temperature grabs your words and tosses them back down your throat before they get very far making anything more than a garble difficult. This is also called hat weather.

When it is some fresh Roger will wear three pairs of socks, long underwear, two pairs of pants, three or four shirts, a down jacket, a scarf, a hat and maybe another. We don’t look at a thermometer when it is some fresh, we don’t need to. It is some fresh when there is an inch or more of frost on all the nails and metal handles inside the barn and we warm our hands on the utters of cows and around lit lightbulbs. When it is some fresh, cold is just another layer that Roger puts on in the morning and doesn’t take off until he slips into bed at night.

Tomorrow it is going to be some fresh on the farm at 6am. I know this because it is already minus 10 windchill and we have hours of night in the freezer still to go. At least I expect so. I’ll still be in bed. I’m not an idiot! I’ll get over there when it is back to being brisk. That’ll be sometime in March.