Home > Blog > Articles > How I did It- chimps in trees

How I did It- chimps in trees

How I did It- chimps in trees 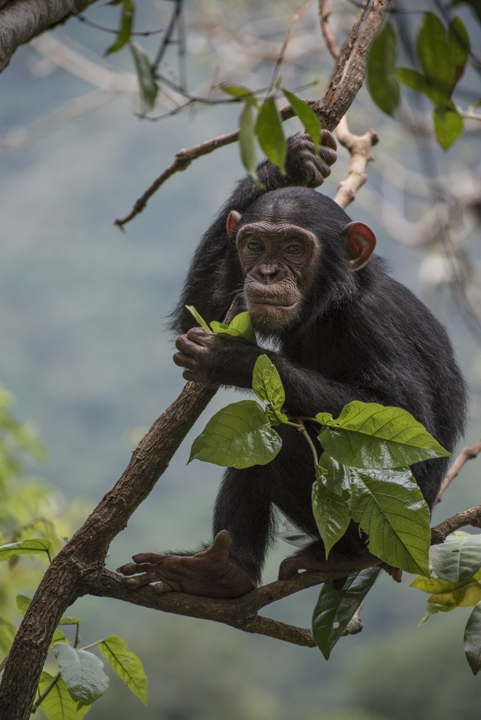 I thought I would do a bit of teaching for the next few blogs since I have been preening and strutting the last few blogs- time to get back to what I do best. I am going to pick a few of my favorite pics from my Tanzania trip and talk about how I got the shot- a behind the scenes look at what I was thinking and dealing with in order to get the image. While the pictures will be from my trip the principles will apply to photography anywhere.

This picture of the juvenile chimpanzee in the vines of a tree looks pretty straight forward- focus on the chimp, blast away- but it is not quite so easy. Nothing in photography ever is.

I had a few compositions in my mind before I got to the chimps, shots I wanted to get if at all possible. I often do this to make sure I get shots I don’t already have and to get the shots I think I am going to need for my presentations and writing. A chimp in a tree, in its natural environment, was one such shot.

But the problem with a chimp in a tree is that you are looking up (being terrestrial and all) and the sky behind the chimp is always photographically awful. I had a cloudy bright sky which was great for the dark chimps but when looking up in a dark forest the sky became blown out highlights in my image.

The solution was to try to photograph the chimp at as close to their eye level as possible so I would be shooting across at them rather than up at them. This allowed to shoot against a background of the far mountainside rather than the sky and it eliminated the blown out highlights.

Ah, but how do you get to a chimp’s eye level? One way is to be on a ridge and wait for them to be below you. since they were moving all the time and going a lot faster than I was this was really hard to do. The other way is to try to climb as high on a hillside near the chimps and photograph across at them. This is what I usually tried to do but it wasn’t easy. Branches, vines, leaves always seemed to get in the way. 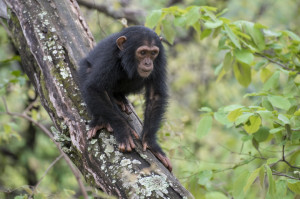 Once the guides knew what I was looking for though they helped me find vantage points where I could shot across at them. For this shot of the little chimp my group of 5 got to the ridge top before the chimps did (bushwhacking all the way up a very steep slope). Then I waited in an open spot hoping a chimp would climb into view. 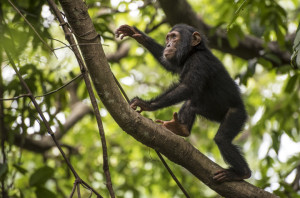 This time I was lucky, several chimps cooperated! All the shots are hand held at an ISO of around 3200 and were shot wide open with a Nikon 70-300 at f5.6. You can see that I shot wide open with no depth of field  because the the hand in back is out of focus. If I had tried to stop down or use a lower ISO I wouldn’t have had enough shutter speed to get a good handheld shot.

In the end, it is all about background. A good background will enhance your photography, one with blown out highlights will destroy it. All it took was a lot of effort and a little luck.