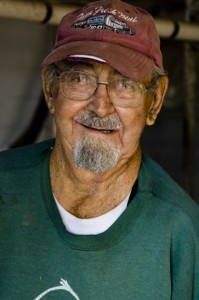 Hugh Bromley died early this morning in his sleep in the same room in his house that his wife, Joan, died 4 years ago. He was in his 96th year, as he would say, the last of the sixth generation of Bromley dairy farmers in Danby. All but four of his years he spent on the farm watching as the first gas and then electric lights came into the valley, the first car came up the road, the first voices were heard over a wire and the first tractor pulled a wagon up the hills. He fought with Patton in the Battle of the Bulge and was tough on nearly everyone else in Danby when he got home but I knew him as a sweet old man and I loved him dearly.

Last fall Roger and Trish moved up the hill from their little house to the big, empty house where Hugh lived all by himself. This is the same house in which Hugh spent his childhood, brought his new wife after the war, raised a family and saw Joan pass away. Enid, Trish’s 82-year old mother, moved in to the house as well to be closer to the care from her daughter. Together, the four of them reanimated the old house and made it the warm old home it once was.

Up until his last few days Hugh lived in his recliner in the extended kitchen- parlor in the front of the house. In January macular degeneration stole the last of his eyesight and by February arthritis had robbed him of his mobility. Unable to get to the barn just 200 feet away he spent all of his time in his recliner, sleeping, eating and listening to the farm go by. In May as the grass greened the meadows with the promise of hay, Hugh began to finally fade away as age and delirium savagely crept through his body.

This last week I visited him often. He always remembered me and recognized my voice and would ask me what was happening on the farm. He knew it was getting on to be June and that it was time for Roger to finish up down at Hoppers and start planting corn in the road patch below the house. He also always remembered Abe, “you old scoundrel’ he would say, and would reach out his hand to find Abe’s head and give it a little scratch.

I will miss my old friend, miss his stories, his twinkle in his eye, his steadfastness. Hugh, along with Roger, introduced me to this farm and in many ways to a new, richer life. His generosity and his acceptance of a ‘flatlander’ in his barn opened up my world and filled it with incredible joy and wonderment. I will forever be thankful for my time with him. It was an amazing gift and I am a much better person for knowing and loving him. 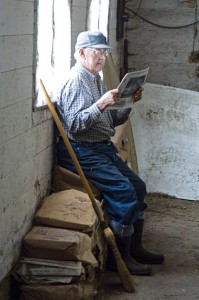 And now I sit on the bale of hay Hugh would sit on in the milking barn as he waited for Roger to catch up and finish the milking. Piper, the barn cat, sits on my thigh just as he sat on Hugh’s and Abe lies quietly at my feet as he did with Hugh waiting for an old hand to reach down and stroke his head.

Hugh would sit here and watch the old cows in front of him eat their silage. “This one can really eat, she’s been a real good cow. But she’s,” pointing to the one next to her with his ski pole cane, “a picky old bitch. Yes she is.” And then he would stand and push a scraper up the manger, one of the few chores he could still do in his barn.

I’d often sit next to him and we would talk. Mostly he would talk and I would be happy to listen. More often than not it was the back-when stories he so loved to tell and I so loved to hear. I’d write as many of them down as I could but my ear missed more than it caught and I lament all the lost stories. My heart, though, never missed a thing and every year, sitting with Hugh, it grew fuller. Eventually Hugh would slowly stand and grab the scraper mumbling “yer a good ol gal” to his favorite cows as he shuffled down the manger.

He has shuffled down his last manger now, off for good to rest on another bale of hay. I know he’s still watching the farm but now his sweet Joanie is by his side. After 60 years of being together I am sure the last four have been terribly lonely for both of them. Joan is probably humming a little French tune and Hugh is most certainly wearing his old brown rubber boots ready for the next chore.

There are probably not many old cows up there in heaven for Hugh to talk to but there must be plenty of old tractors and acres of tall, grassy meadows. And certainly there are piles and piles of cow shit. Why else would a dairy farmer call it Heaven?