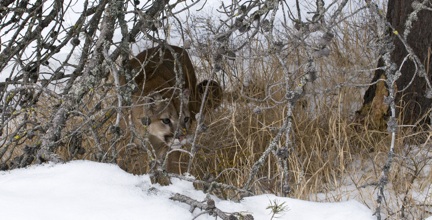 This is my latest favorite photo. I took it in March at the Triple D Game farm. I have a ton of Mt. Lion shots from Triple D, probably several hundred good ones and probably a dozen or more really good ones so it was unexpected that I would take more while I was there. This animal was also very reluctant to walk on the snow that day. A mountain lion not liking snow, who would’ve thought? So any time he was on snow he was in an awkward pose and the pictures didn’t look right. I saw this patch of old grass nearby and asked if we could try the animal there. He was much happier there but he wouldn’t leave the grassy area. So I photographed him peering out through the branches.

this is a different kind of shot for me and one that I wouldn’t normally take but I have so many shot of mountain lions trying something different seemed like a good idea. Part of the reason I like it so much is probably because it is so different for me. The crop worked out well too. It is now framed and hanging in my office, ever ready to pounce.