Here is the first picture: 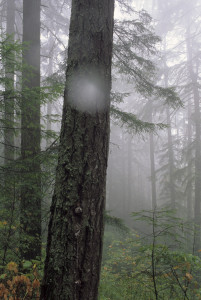 This is an easy one. I took this photo more than two decades ago when I was ignorant about the benefits of a lens hood. I was working on my first book on the old-growth forests on the Pacific Northwest and I was, by necessity, spending a lot of time photographing in the rain. I remember wearing a rain hood to keep my noggin dry but I apparently missed the concept of keeping the front of my lens dry. I now use lens hoods all the time.

I was ignorant about the benefits of many things when I was younger- handy bathrooms, large print menus, smart women and dumb luck. Now I know all about lens hoods but I’ve forgotten most everything else.. Oh, well. Use a lens hood. 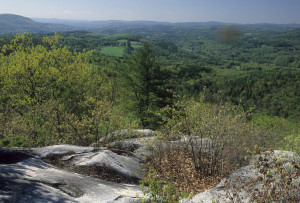 Next one is a little harder: Photography sometimes requires you to pay attention. I know this is something that most of us don’t want to think about but every so often it comes in handy. Everything can be going just great and when you put your images up on your computer you do the old head slap and yell, “Rats!”

Do you see the boo-boo? That blurry brown spot in the upper right? That is an overly friendly mosquito that is doing unmentionable things on my lens. I took a series of these shots and each one has the mosquito in different place in the picture- a ruinous record of a peripatetic pest. “Rats!”

This next one is kinda understandable- it requires attention and some bit of knowledge of your camera. I know, no one wants to read their camera’s instruction book but occasionally it comes in handy. In particular, it is important to know how much of your photo your viewfinder sees. Most cameras will show 96% or so of your photo. That last 4% seems unimportant but it occasionally it comes up to bite you.

See the legs along the upper edge? I know I can easily crop the legs out but this image was on slide film and cropping wasn’t an option. Even today if I took this picture it would bug me that I wasn’t paying attention. Some cameras- usually the most expensive- have 100% viewfinders but most do not. You need to know what your camera ‘sees.’ 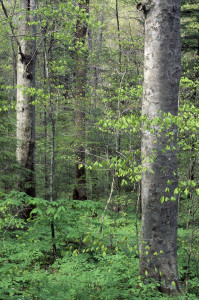 This one is a little more subtle- something I have been tripped on several times over the years. I am thinking so much about the edges and the main compositional elements that the obvious sometimes doesn’t register with me.

The most extreme example of this was one time, using my old 6×7 medium format camera I took a gorgeous shot of a fog enshrouded forest road through a beautiful misty redwood forest. I actually took several of these shot and each and every one, unnoticed until I got my film back, had a beer can prominently on display on the side of the road. My technique was so good that you could even read the words on the label. Oops!

Do you see the metaphorical beer can in this shot? Look at the tree trunks. For a book to be titled “The Nature of America” this image is not going to work. Big oops.

And finally, I’ll toss you another easy one. Now you may think that the problem here is that I have somehow mistakenly managed to merge the black blob in the background with the bobcat’s nose. This is not an easy thing to do especially when you consider that the bobcat is moving and his head is turning all around. Such a feat is really much too difficult for a photographer of my skill level so you would be wrong. 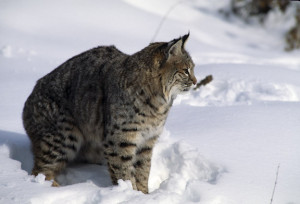 There is actually no problem in this image. It is a very rare image of a cigar smoking bobcat. Ever wonder why you hardly ever see bobcats? Well, now you know. They have this terrible habit of smoking cigars and as we all know smoking cigars is never a good idea- even for….wait for it… cool cats!