A week ago, in between two of my trips I had a chance to actually go out and take some pictures.  Didn’t have any purpose in mind other than to be out photographing- the just for fun kind of photography that we all used to do all the time before assignments and contests and projects and competitions got in the way of our enjoyment. Today I had my first chance to look at the pictures- perfectly nice, nothing earth shatteringly spectacular- photos of a stream. 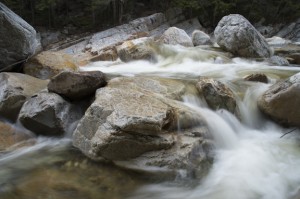 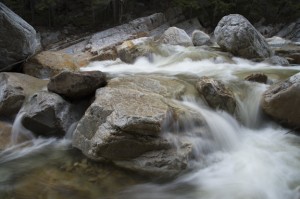 What caught my eye as I was editing the images was the variation between images that were taken only moments apart. Not variation of composition or exposure but variation of subject matter- the steam changed dramatically between every shot! Yes I mean dramatically. Where in one image there was water pouring over a rock in the very next one there was none. It changed the composition completely. I include two pairs of images taken seconds apart. Notice how water appears and then disappears, how the stick on the right is mostly hidden and then mostly visible. These are big differences that strongly effect each composition. I prefer the ones with more water coming over the rocks but I gotta say that I didn’t notice the difference at the time, I just shot my usual burst of three or four images and didn’t think about it.

I have always known that water surges in steams. Sometimes the surge is on a daily schedule with low water in the morning and higher water in the afternoon, sometimes it is on a temperature schedule- higher temperatures generally mean higher water. but I never fully realized that water in a stream can vary so much moment to moment. It is like the stream had a pulse, a watery rhythm, an energy that flowed and ebbed. I don’t know where such a rhythm comes from or why it happens and I don’t really care to know but I am thrilled to now realize it, to be just a bit more connected to the nature of that stream.

What does this mean photographically? I suppose not much. I would suggest though that from now on when you are taking pictures at a stream you should shoot a short burst of images to capture the perfect watery swell or the wanted watery ebb. The water is alive, it has a pulse. Sit and watch for a spell before you take your shots. Who knows what else you might discover?