A couple of weekends ago I was in Gloucester, Mass. looking for pictures for The Lobstering Life book I am working on. The one picture I really want is one showing a lobster being pulled out of the trap when it first comes out of the water. There are two ways this can be done- with a very wide angle lens hovering right over the trap on the boat or with a longer telephoto lens from off the boat on another boat. The ideal to either shot is capturing the exact moment when the person, lobster and trap are in the perfect position. The trick is that the perfect moment seldom occurs and when it does seldom seems to happen in nice light.

I had two days to go out on the water.  The first day I went out on a lobster boat for the day and photographed as they pulled 300 traps. The crew was very nice and extremely cooperative even allowing me to step in front of them as they were working. In this part of the lobstering world lobstermen drop traps in trawls or sets. On the boat I was on each trawl was 150 to 200 yards long (it seemed) and had 10 traps. So by the time one trap came up and was cleaned, rebaited and stowed on the stern of the boat the net trap on the string was coming up. There is no time to relax when working a trawl so for the crew to  let me intrude and interfere with what they were doing was quite generous of them. None the less I had just seconds to step in, compose and fire bursts of 10 or 20 shots before I had to step back. This does not lend itself to contemplative photography! 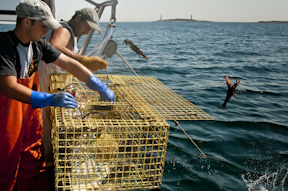 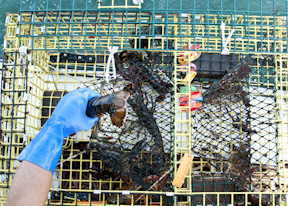 I even tried lying down on the roof of the boat above where the pots were being pulled and shooting directly down on the action. I got some pretty good shots but the angle and perspective was pretty bizarre. I still don’t know if I like them or not. 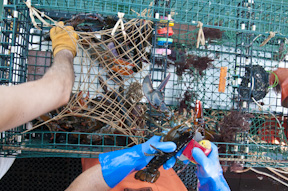 The second day I arranged to go out at dawn for a few hours in a chase boat to try to photograph alongside a lobster boat. The boat was a small Boston Whaler (a 12 footer) which is pretty small for the open ocean but luckily the day was clam and the ocean flat. The obvious difference between photographing on or alongside a lobster boat is that of viewing perspective. The less obvious difference is one of permission and cooperation. I had both when I was on the boat but when chasing a boat you have neither, at least initially. This becomes disappointingly obvious when the captain keeps positioning his boat with its ‘wrong’ side to me.

But then we found Gussie, captain of the boat Gussie’s Girls. Suddenly everything worked! The light was good, the boat was colorful and with one shot out of the 400 I took I got a lobster in a trap in good light being hauled up the side of the boat. Yeah for me!! 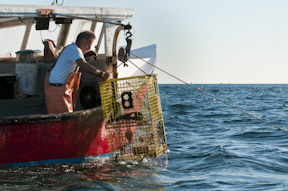 So there you have it, 1200 pictures over two days of lobsters being pulled out of the water. One I really like and half a dozen that are good enough, I think, for the book. There are dozen other pictures I like of other things related to lobstering (see the coming blog entries) that I took on those two days so don’t feel sorry for me…I got some very nice images. I just didn’t get the exact ones I was looking for. I guess I will have to go out again, and again, and again! 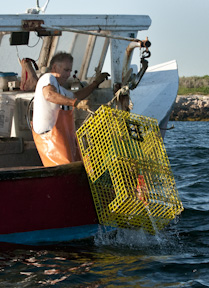 This brings up  an interesting point of conversation. Whenever we see a photographic presentation be it a show or a gallery or a book or a magazine piece we are seeing the best images that photographer had. We are not seeing the ones that are pretty good nor are we seeing the ones the were just okay and we are certainly not seeing the hundreds of terrible shots the the photographer first took as her or she learned how to take the best one. No, the only ones we see are the ultimate ones, the very best. Yet when we go out and try something new and get less than what we hoped for we get all disappointed and bummed out because the pictures didn’t turn out as well as we would’ve liked. Wake up! Smell the delete key! Photography is a process. We all get better by practicing. One or two tries means nothing, talk to me after ten or twenty. Then you are getting good stuff. After thirty you are getting great stuff. So enjoy the process and keep shooting. If this was easy everybody would be doing it!