In mid-May I had the pleasure of going to the western coast of Vancouver Island and reacquainting myself with the area around the Pacific Rim National Park. The park lies on a long finger of land that is the western edge of the ocean as well as the eastern edge of a huge, wild, island-studded body of water, the Clayoquot Sound. Altogether the park, the sound and the adjoining mountains comprise the Clayoquot Sound World Biosphere Reserve. It is a spectacularly wild and beautiful place. 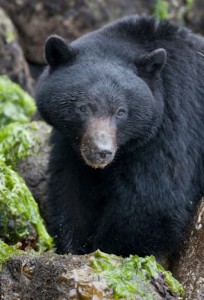 The black bear was photographed from a small tour boat at low tide on the shoreline of the Sound. We were so close that we could hear the crunch, crunch of the bear eating the crabs he found under the tidal rocks. The captain turned of the motor and let us drift into the shore so we could get close shots of the bear as it hunted the waterline. We saw 4 or 5 bears on the one trip that I took and each one was as unperturbed as this one. I used a 300mm f4 Nikon lens, hand held with my arms propped up on the deck on the bow of the boat. 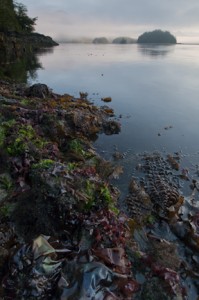 The low tide kelp photograph is an attempt to show the marine richness of the sound. I could’ve spent hours just playing with all the colors and textures of the kelp and seastars. For this picture I decided to use my wide-angle lens and show the marine seascape with the kelp as the foreground. In order to get the feeling that you could step right out on to the kelp covered rocks (what I call participatory landscapes because the viewer feels like he or she could be right there) I got above the closest part and the scene and tilted the camera down. This drew in the foreground and made it a stronger composition. I used my Nikon 12-24mm lens. 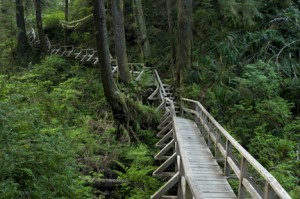 I am doing a workshop here next year with my workshop company, PAW. I can’t wait to get back up there and revisit these sites and show them to the participants. I think I may go a bit early to just to photograph myself. What a place for nature photographers!