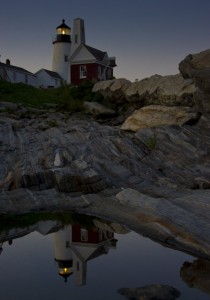 Since we are on the topic of lighthouses I thought I would share four suggestions on how to get your best shots. These may seem obvious to you now but when you are out in the thick of battle some things become a bit less obvious and your composition will suffer.

First- If you are doing a grand scenic shot choose a composition that includes water (and rocks if they are present). A photo of a lighthouse without water removes any context from the image. Lighthouses are where they are to protect boats (which float on water) from shallows and rocks. So by including both water and rocks (or whatever boats need protection from) in your composition you are telling the complete story of the lighthouse.

Third- Shoot at twilight. Twilight is the time of day 45 minutes before sunrise and 45 minutes after sunset. During this time the sky gets to be a beautiful cobalt blue and there is just enough light to show details in the landscape. Everyone always shoots lighthouses at sunrise or sunset but I think twilight is better. Besides, twilight always happens no matter the weather but sunrise and sunset are very temperamental.

And finally- Rather than taking the same old, same old shot look for some other way to photograph the lighthouse. Is there a puddle nearby that might hold a good reflection? How about a window for a reflection? Have you thought about doing just a piece of the lighthouse- the top or window or from inside? Are there grasses nearby that could act as a foreground or other buildings that could be used in your composition? How about a different time of the year? during a winter storm? On a clear starry night?

Lighthouses are wonderful subjects to photograph but don’t always go and try to do the same thing each time. Try something different, you may be surprised at what you get. 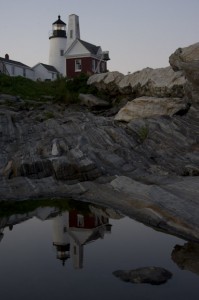 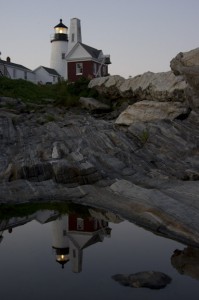