I thought I would start a new series on my blog that illustrates the truly unbelievable things that people have said about some of my photos. Some of the comments are inspiring and some are really quite…well, stupid. I’ll let you be the judge which is which.

Exhibit One: The Mechanic 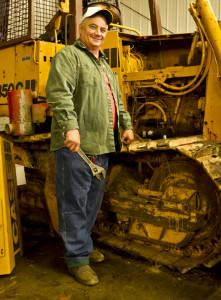 I took this shot in support of a project I was developing to celebrate the iconic working people of America. I was looking for carpenters, and welders, and lumberjacks- the he-man jobs that built this country. I found Perry in far western Pennsylvania when I went to look at a used mini excavator for my great friend Roger, the dairy farmer. Perry and his family ran both a 200 cow dairy and a heavy equipment company that sold both new and used equipment. In the process of buying the little excavator (who doesn’t need an excavator?) I got to talking with Perry about my project and I asked him if I could take his picture. When I got back with my camera he was standing right where he was, wrench in hand, smiling at me. I knelt down and snapped a few shots, paid the man and got me a great shot and an excavator! All in all, a good day.

After several months of collecting more shots I had enough to show them to a book publisher I knew. As I was pitching him the Working Icons idea he was paging through my shots. When he saw Perry, the quintessential mechanic, he looked up at me and said, “He looks too much like a mechanic.”

“A mechanic but not so much.”

That’s where the conversation stopped. I couldn’t think of anything else to say. My head hurt. It makes you wonder how any book ever gets published.