I learned the other day that there is actually a time when it is possible to have too much of a good thing. I never would’ve though this was possible- all the other good things in my life I can’t get enough of but yesterday things changed.

This last week we have had a series of snowstorms that left a couple of new feet on the ground already covered with several feet. This is the most snow we’ve had on the ground in the 12 years I have been in Vermont. Remembering a shot I have always wanted I called my friend Pete and together, with his snowmobiles, we rode up into the Green Mts. near my house. Our destination Black Brook and the Appalachian trail crossing that is 6 miles from my house. To anyone who has been to one of my Vermont workshops this is a favorite location of mine. It is also where the cover of my book The Nature of Vermont was taken. I have the shot in every season except winter- it is a three season road- so snowmobiles are essential. 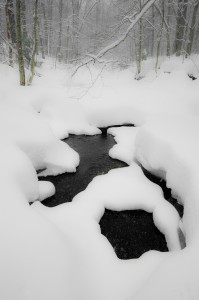 Waiting for a snow day for the winter wonderland look, Pete and I drove up and I stumbled through the deep snow to the one opening I could see in the stream. Unfortunately, with 4 feet of snow on the rocks and a winter’s worth of freezing the rest of the stream was hidden to the point of being invisible. The shot I got is okay but certainly not great and probably not worth all the trouble of getting up there.

What did I learn? In winter, if you wait too long streams can freeze over and snow-up to the point where they are not picture-worthy. You need to be able to see mostly water to call it a photo of a stream. I now know that I need to do this shot in December right after or during an early snowfall. Then there would be lots of water showing and the rocks would all have great pillows of snow on them. That is the shot I wanted! Oh well, there is always next year, and the year after, and the year after, forever.