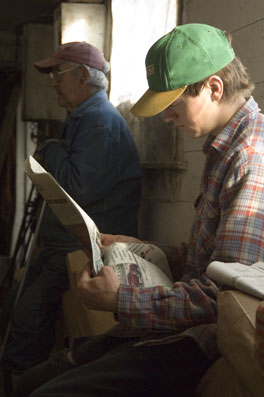 Let me describe the farm to you before you start making any wrong assumptions. First, this isn’t just any farm. It is an old New England working dairy farm, a hill farm of about 600 acres, with century old stonewalls, beautiful gnarled sugar maples, wild apple trees, slate-roofed barns and views that reach to the far, far horizon.

To say that the farm is authentic, that it is genuine old-time New England is an understatement equal to saying that Joan of Arc was a bit jumpy around flames. The farm is about 230 years old and has been in this family for the last 150 of those years. Every building, every stonewall, every tree, every swale, every tool has a long history of use and many generation of stories attached to them.

Also, more than half the farm is still forested and about half of that has never been logged or otherwise messed with so the trees are big, the flowers gorgeous and the wildlife diverse. The rest of the farm is broken up into pastures-some large, some small- meadows-some wild, some tame- and barnyard- some thick with mud and some thick with….er, ah, other stuff.

There are 120 cows, or so, on the farm. Half of them are milkers and the rest are heifer calves, yearlings, young heifers and dry cows. (Just so we all stay on the same milk line (that’s farm talk), a farmer would say there are actually 60 cows and 60 heifers. This is because a heifer is an animal that hasn’t had two calves. So when I say that there are 120 cows on the farm what I am really saying is that there are 120 animals on the farm that look a whole lot like cows but only half of them really are. Is that clear?)

Where was I? Oh, yes, describing the farm.

One of the things that makes this farm so special is that it is run the old fashioned, traditional way. For example, in season, the cows go out to the pastures to feed during the day and come into the barn morning and night to be milked. Not the most efficient way to do things, with all the time wasted herding and chasing after cows but certainly the most pleasant way.

This is not how is it usually done these days. Almost all dairy farms are run with efficiency foremost. The more efficient the farm is run the more likely it will be able to eke out a profit. A profit means that the farm survives another year.

On a dairy farm it is much more efficient, and therefore more cost effective, to keep the cows in the barn all the time and bring the food to them. Letting the cows out takes up valuable time and increases costs, not to mention irritation. When I asked the framer why the cows are let out and not kept inside all the time like most other farms I was told “Well, it just seems that the cows would be happier if they went out whenever they could. Wouldn’t you?” Made sense to me. A farmer who wants his cows to be happy! You gotta love this farm!

Another thing that makes this farm so special is the family that works it. I have never been so welcomed and made to feel so much a part of a family as I have on this farm. Seven generations have lived on and worked this farm and three generations still work it. Amazingly, every generation that has lived on the farm has had three children and every child has been a boy. And every time it is the middle son who takes over the farm from the father. You gotta love this farm!

Here is the main cast of characters that I deal with on a daily basis:

Hugh is the patriarch, the grandfather (he is actually a great grandfather now), 89 years old and tough as nails. He can be “stiff as a board” sometimes when it comes to trying new ways but to me he has always been terrific. He still grabs a shovel or a scraper every day, drives the tractors around, rides into town to do errands and totes around full buckets of milk. His language is a tad colorful but that’s okay; I am learning lots of new ways to string together cuss words that I never would’ve thought of myself.

Roger is Hugh’s son. Roger would have to gain 15 pounds to be called skinny and he has a mischievous twinkle in his eye that he couldn’t hide with duct tape. He does the majority of the work and runs the dairy (when Hugh thinks he is not) and is my main source of information about the goings-on on the farm. Most every day when I am home I greet Roger at 6am in the barn to start the day milking and when I can, I say g’night to him at 9pm when the evening milking is finished.

Trish is Roger’s wife. Trish carries a smile around with her as easily as most people carry around their shadow. It is darn near impossible to be grumpy or a curmudgeon around her despite many concerted days of trying on my part. Trish runs the house just like Roger runs the barn- everything in its place unless it is somewhere else and there is one right way to do everything unless you want to try to do it differently just for fun.

Ike is Roger’s and Trish’s middle son, early twenties and lean as a willow wand. Ike has an odd outlook on farm happenings. Rather than thinking cows are, if not the stupidest animals on this earth, certainly high on the list as everybody else does who has ever encountered a cow, Ike thinks they are cunningly diabolical instead. “They just play dumb, but as soon as you turn your back they are doing something they shouldn’t be doing.” The more time I spend with cows the more I think Ike is right.

Rob is the youngest son, also willow wand thin and befitting his position in the family hierarchy is the happy-go-luckiest of them all. Nothing seems to faze Rob and he jumps into projects with a happy indifference that is contagious. Rob is just finishing a nursing degree but comes back to the farm whenever he can to help.

But besides being a welcoming and beautiful place the farm represents something important and something that is rapidly fading from our collective cultural experience.

Fifty years ago there were 50 working dairy farms in Danby, the tiny village where I live in Vermont. Now there are 4. It is the same throughout all of New England. These little hill dairies, despite their historical and community importance, have no chance to be able to compete economically with the large industrial dairies of the mid-West. What is happening ultimately is that this region, this state, this community in which I live is slowly losing its memory. It is the same where you are as it is here. So not only is this dairy rich in stories and just simply gorgeous it is representative of a dying way of life.

I am giddy thinking about all the possibilities associated with this farm. Every time I go I feel like a miner who with every pick of his ax hits a golden vein. There are stories everywhere on the farm: every building has a long history, every stone wall or gnarled old maple has tales to be told. All I have to do is ask and the stories come tumbling out. My job really is to just catch them and keep them safe.

It has been a year now since I first was introduced to the farm and I find that when I turn toward the farm and I begin to head that way I often have no real purpose in mind. As often as not I get there with out any clear idea why I have come and just as often I leave with something- a picture or story or two- that is as wonderful as it was unexpected. Sooner or later (hopefully sooner) a book will emerge out of all this time on the farm.

I am not sure why I am so nonchalant about all this. Perhaps it is the sure knowledge that Roger or Ike or Hugh will soon lead me to something interesting or fill my head with stories or say something irresistible. Perhaps it is the good chance that the light will change and some new landscape or detail will emerge and compel me to take its picture.

Perhaps it is that I just enjoy their company. I tell others that I go looking for images and tales and I tell myself I go looking for a picture or two. What I think I am really looking for is someone to talk to or a new piece of the farm to explore. This is the fuel that stokes my creative fires and makes my heart beat faster for in them and in their stories I see a chance to find more of me.

If you want to see some of my images and read some of my journal entries go to the Farm Gallery on this website or read on below.