Well, I’ve been at it again, chasing the weather in hopes of getting some wintery lobstering shots. Once again a storm was forecast to come up the coast and hit the Gulf of Maine. Not a big storm but big enough. What I learned from my last trip was that even if there is snow in the air for the photograph to look ‘wintery’ there has to be snow on the ground. This means that you have to wait for enough snow to accumulate before you start shooting.

But here is the catch- you have to have light in order to photograph! I know it seems obvious but sometimes even though it is obvious to you and me Mother Nature is still in the dark. I mean literally, in the dark because when the storm hit and it was snowing hard it was obvious that by the time there was going to be enough snow on the ground it was going to be too dark to photograph.

So what do you do? It is snowing, there are lobster boats out in a pretty harbor but there is no snow on the ground and I just drove four hours to get the shot. I decided to shoot long through as much falling snow as I could to obscure the background (and its lack of snow). There were a couple of landscape shots with nice foregrounds but without snow on the close stuff the entire shot would be a bust. When the boats all lined up (from the wind and tide) I had my shot. 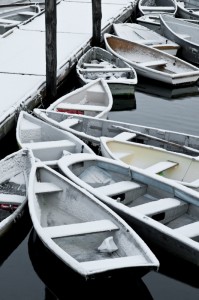 The harbor is Cape Porpoise, a few miles east down the coast on Rt. 9  from Kennebunkport. It is a beautiful spot with lots of photographic possibilities. Cape Porpoise is also about the closest harbor to me that has a good number of lobster boats still in the harbor in the dead of winter.

So why did I only get one shot? I got others but they weren’t as nice. Also I was losing light rapidly. When I came back in the morning before sunrise I got another shot of the snow covered dories but the sky was getting blue, the sunlight was becoming harsh and the shooting was done at 7:15. So I caught some breakfast and headed home.

There is another storm that is supposed to show up and cruise down the coast next Tuesday. Yes, I’ll be out on the coast trying to catch winter once again. This time I am going to try to find some people to include in my pictures. I’ll keep you posted.