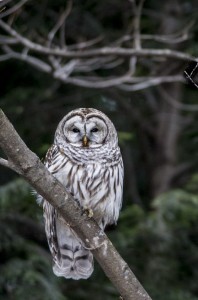 I had just come in from a nice walk when Claire tells me that a friend has just called and said that there was a snowy owl perched in a tree above the Danby town offices! Well, that would be something! Snowy owls are pretty common this winter in New England- there has been a substantial ‘invasion’ of this Arctic owl throughout  the area. Most of the birds have been found in the coastal areas but there have been half a dozen in the southern Hudson River valley, one at the Albany airport and even one that has lingered in Vermont- first in one of the parking areas of the Killington ski area, then at a big nursery just north of Rutland (20 minutes from Danby). So it wasn’t out of the question that one might show up in little Danby above the old school house that is now the town offices.

I grabbed my camera and Claire grabbed the car keys and off we went in search of a snowy owl. When we pulled into the town offices the owl was quite apparent- sitting as nice as could be in the branches of a sugar maple above and behind the building just as we were told. The only problem was that it was not a rare snowy owl- a very large, usually mostly white bird- rather a common barred owl- smaller, brown with a striped horizontal band of feathers around its neck (barring) that makes it look like it is wearing a scarf.

Disappointed but not deterred I got out my camera with my 300mm lens and took a few images as I slowly got closer to it. Barred owls are pretty tolerant of people so it wasn’t hard to get close enough for a few good shots. The images I like best though were not the closest ones with just the owl but rather the farthest away ones with the owl as part of the scene.

I find this type of composition- the animal as part of the landscape- to often be my most favorite. I have plenty of tight close ups of all kinds of animals and I have spent thousands of dollars on lenses that allow me the tight close ups but more and more I am not taking those shots. I am looking for artistic ways to include more of the habitat in my wildlife photography, to include the where it lives along with the what it is.

This type of shot often doesn’t work if the animal is too small in the composition or too hard to see but it can work really well if the background works with the subject and the light isn’t too contrasty. It’s something to think about next time you are trying to get closer to an animal to fill the frame but aren’t having much luck. Back off, think artistic thoughts and include some of the habitat. You might be surprised.