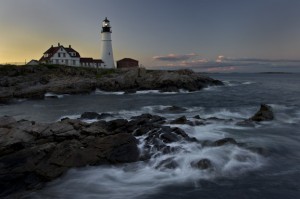 I have been traveling to Maine a lot lately getting images for my new “Memories of the Maine Coast” book. Summer is a tough time to photograph along the coast because the light is pretty dreadful between 9am and 4pm. This means I am up very early and very late and then do very little for most of the day. I guy can eat only so much ice cream!

Portland Head Lighthouse is said to be the most photographed place on the coast and I can’t disagree. I have been there on some days when there are several bus loads of people swarming the place. I have also had terrible luck photographing there in the past. All my previous times I have been skunked by very mediocre light but finally, on this last trip I got a nice enough sunset and some good wave action and finally got a pretty nice shot. I won’t be the best shot I’ll ever get of Portland Head but for now it is my best. Hope you like it.