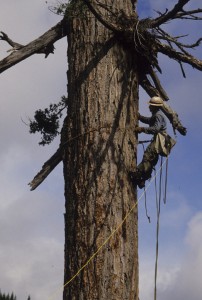 I though I would share the very first photos I had published in a national magazine back in 1985- photos you wouldn’t expect from a nature photographer purist.

I was living in Corvallis, Oregon and my wife at the time was teaching in the forestry department at Oregon State University. I had done some picture for hire work for some of the professors documenting their research, etc. but nothing I thought would be of interest to a magazine. One day I was asked if I wanted to photograph trees blowing up. Not your normal question but one that I wasn’t going to say ‘no’ to.

Turns out that the College of Forestry was blowing the tops off some big Douglas-fir trees up in the nearby research forest and they wanted some photos of the whole operation. Why were they doing this? Looking back now it was probably due to an extra case of beer and blasting caps lying around but at the time I was told they were making wildlife nesting places. Really? Blowing off the tops of  trees in the middle of a huge clearcut? Never mind, I was hungry and eager back then.

I watched and photographed the entire process: getting the gear organized, climbing the trees, drilling the holes, inserting the sticks of dynamite and finally, blasting the tops off. For the final shot I just held the shutter down as soon as I heard them yell “Fire in the Whole!!” Nothing particularly creative or imaginative about the shots but they were certainly unique. 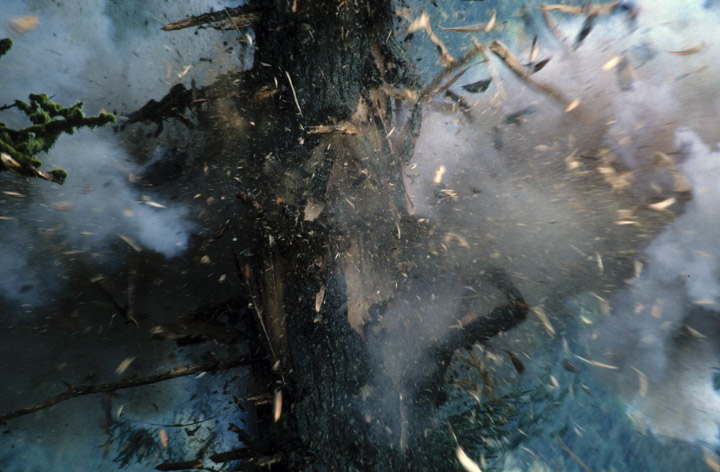 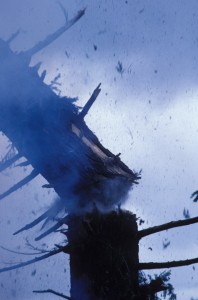 I sent the images around to various magazine and several were interested. Pacific Northwest magazine bought the idea eventually and I wrote up a nice story about the whats,whys and hows. In the end, the magazine used two pictures and two sentences but I didn’t care- I was published!

I sold the images several times again over the years but that practice of using explosive to ‘improve’ wildlife habitat is surprisingly less popular these days than back then so these pics are not very useful to me anymore. Unless, of course, you happen to know someone with a spare case of beer and blasting caps!

The whole idea was a bust by the way- other than the occasional songbird no animal actually used the blown-up snags. But I did! And they certainly improved my personal habitat! Thanks, Oregon!