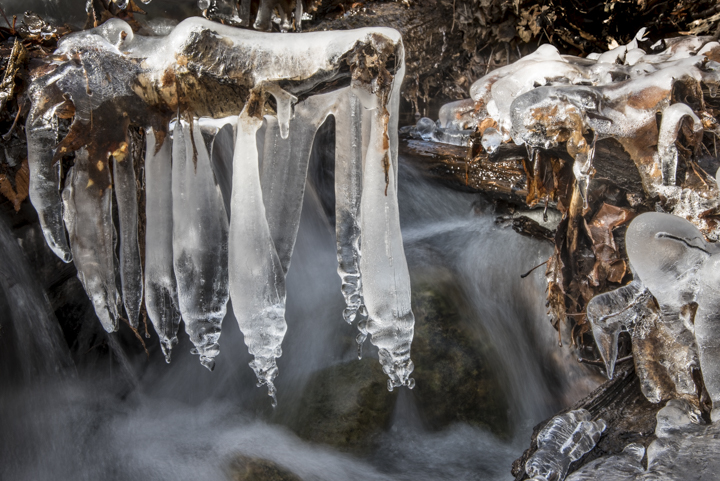 It’s been a very unusual winter here in Vermont. Despite what you may have heard or surmised northern New England has not been visited by winter this year. The big snow storm that hit Washington DC and New York City delivered not a flake here (we have plenty of our own) and the last one a week ago missed us as well. Looking out my window as I write this there is no snow to be seen, none, nowhere, nothing. 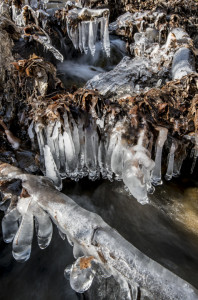 This may be confusing to some of you who listen to national news and the weather channel. To them, New England is somewhere on the Connecticut coast. If Hartford or Old Lyme get snow then all of New England did. In fact, for me to find enough snow to go for a snowshoe today I would either have to go several hours north and several thousand feet higher in elevation or go several hours south and play on the dwindling drifts.

Consequently, I have been in a bit of a photographic funk with very little around to spark my creative juices. Determined to find something wintery to photograph I headed up into my woods hoping that with enough wandering I would eventually bump into Old Man Winter or at least find where he’s been loitering.

Turns out the old guy departed long ago and the only thing he left behind was some ice in a small brook that crosses my woods. Not much ice but least it was pretty.Where ever the water splashed as it leapt over branch and rock icicles formed from the drippings. As each day warmed up the icicles melted away but with cold nights of late they reformed. Walking the stream I found a couple of nice icicle clusters and with camera and tripod in hand I got a few nice shots. The light wasn’t the best and I could’ve used a longer and a wider lens but no complaints- I was outside, my hands were cold, chickadees were in the trees overhead- all was good.

This coming weekend we are supposed to get below zero temperatures so the icicles should really be good then. What do you know? I’m excited again about winter!