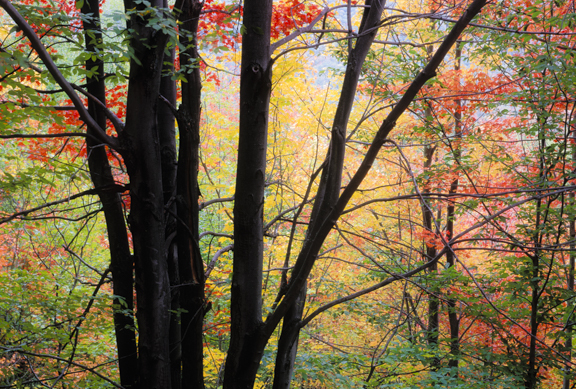 It’s almost Fall color season here in New England so I thought I would give my first report on how the season is progressing. It’s not.

Still too early to get an idea of what is going to happen. We have had a long, very dry period here but most of the trees seem to be doing fine, there just isn’t much color. The only color I have seen is in the lowest, coldest wet spots but they always turn very early. The hillsides and valleys otherwise are still green. This coming week the forecast is for much cooler temperatures and rain- I think the rain is g0ing to help bring some vibrancy back to the forest and the cool temps might kick start the turning of the leaves.

If I had to guess I would say the traditional dates of October 10-14 still looks good but it would surprise me if the peak was even later. If you happen to be in New England now and are looking for color I would either head to Quebec or find an old farmer and ask him how his day has been. I promise you’ll get lots of color then!