I have a new rule when it comes to anticipating photography on a tourist trip- the better the pictures in a brochure the less likely you are to get them. This struck me when I signed up for a two hour puffin cruise along the coast of Maine this past week. The photos in the brochures were all striking- little puffins posing on rocks, little puffins bobbing in calm blue waters, little puffins doing what little puffins do- so I paid for a late afternoon cruise to go see the cute little puffins.

It turns out that most of the pictures in the brochures were not ever going to be possible let alone likely. Puffins live in burrows so when they are on the nesting island they are almost always underground. Those shots of little puffins standing around smoking cigarettes and shooting pool are only possible if you are on the island, not on a boat 200 feet offshore! And the ones in the water are only possible if you are in a much smaller boat- the big tourist boats don’t go very close to swimming puffins so as not to bother them. I did get a shot of the island with gulls and terns overhead, dozens actually but not a puffin to be seen.

I need to say that this was not a puffin photography trip but a puffin sight seeing trip. We did see puffins, probably a dozen or so total. We just didn’t see any that lent themselves to good photography.

I was just about to give up when a pair of puffins floated reasonably close to the boat, about 100 feet away. Even shooting at 450mm the birds were but specks in my viewfinder. Just about when I was ready to give up, one of them took off heading toward the boat. As it corrected its course I got off a burst of 8 shots- one of which came out well enough to use in my next book. This is not a testament to my skill as a photographer but instead a testament to the incredible quality of the sensor in my Nikon D3s. The image shown here is cropped down severely from the original-  I cropped down to about 1/8 of the frame. Thank you Nikon. 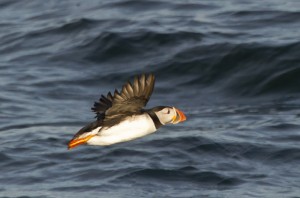