Serious snow on the farm

Serious snow on the farm

Here is what happens on the Bromley farm when we get lots and lots of snow followed by a day or two above freezing. 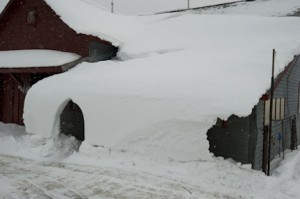 This is the side (an alcove) of the horse barn- what is called the calf barn- where the new calves are kept during the cold months. When the snow slowly crept off the roof it formed an arching wall about  4 feet in front of the door to the calf barn. So Roger got out his trusty chainsaw and cut a nice new ‘door’ in the nice new ‘wall.’

So what is wrong with this shot? No, its not the light although it isn’t great. Two things I should’ve done better- First, I should’ve waited until Roger was coming out on the ‘door’ with the wheel barrow. Adding a person to this scene gives the picture some life and a nice sense of perspective. As it is now it is just a still life, as in no life. Without a person there is no story. Second- I shouldn’t have said to myself “I’ll come back and do it right tomorrow.’ because tomorrow the entire roof slid and the door is no more! I know better than to put pictures off but sometimes I just don’t pay attention.