You would think that after two mostly unsuccessful times chasing winter storms on the coast of Maine that I would have had enough. This winter is not winter on the coast. The Maine coast was stuck in November until January and now it jumped ahead and is stuck in March. Either way the result is the same- cold, dreary, wet and no snow. All in all the perfect mix for miserable photography. 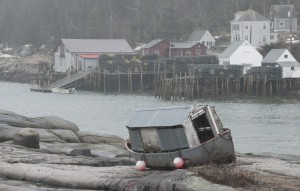 But last week I tried once again, this time with Brenda, and this time trying to get out in front of the storm so I could be at a location when the Nor’easter hit. That all worked out fine. The only problem was that the storm was all rain, not a speck of snow. It was some storm- 60 mph winds, driving rain, 36 degrees- and it made for truly dreadful photography conditions but it wasn’t wintery.

So what do you do when you are somewhere looking for a particular kind of shot and it just doesn’t work? You do the best you can. We shot November scenes, March scenes (they are the same) and some conceptual winter scenes. What does that mean? It means photograph scenes that could only be taken in winter even though it may not look like winter. 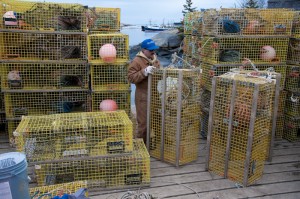 In a Maine harbor that means photograph lobster boats with stacks of lobster traps in the background or photograph people in heavy winter clothing. Both of these imply winter even though they are not obviously so. Are these pictures as good as a winter wonderland harbor scene? Nope. but if the Gods eventually do smile on me and I get the shot I dream of then these other pictures will fill in rest of the winter story. It is the old lemon/lemonade deal. You just have to learn to appreciate lemons.