We Shoot Horses, Don't We?

We Shoot Horses, Don’t We?

We Shoot Horses, Don’t We? 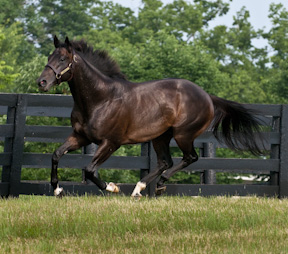 So how do you go about photographing a running stallion? Before I tell you the hows lets review the wheres, whats and whys. Last week (early June) I was employed by a thoroughbred horse farm, Pin Oak Stud, in Kentucky bluegrass country to provide all the photographic images they would need for all their advertising in the near future. This is the fourth time I have done this for Pin Oak and while it is an incredibly beautiful place to take pictures I am ‘under the gun’ the entire time I am there. The pressure to create at my highest level can make dull light or uncooperative animals very stressful, very frustrating and not much fun.

Why is it stressful? Because it is not my usual kind of photography, that’s why. No, not the subjects- big animals and beautiful landscapes are what lots of people photograph. This is stressful because I usually photograph to please me but at Pin Oak I am photographing to please others. This means that doesn’t make any difference if I think the picture is magnificent, if they don’t like it is no good.

The other reason it is so stressful is because for a picture to be considered useable the horse has to be in the perfect body position with an imposing posture and formidable attitude. This means many, many of my pictures were rejected because a leg was too high, the knee was too bent, the ears weren’t turned properly, an eye wasn’t bright, the mane was flying, the tail was too high, the back legs were too spread, a leg was too straight, too curved, too under the body, to low, too wide, the neck was too curved, the belly too long, the nose too long, the stride too long and on and on and on. Getting a good picture was like looking for a needle in a haystack without knowing what a needle looked like. 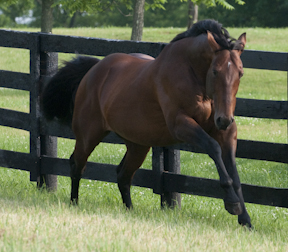 Luckily, I didn’t have to pick the pictures I just had to take the pictures. My job was to get pictures that were properly exposed, appropriately composed (all horse, nothing else) in beautiful light and most importantly, in focus. Their job was to pick the ones they liked. So I took a lot of them and they picked a few of them. I took about 5500 pictures in 5 days, 5000 of which were just of the three stallions (or studs). Of the 5000 they considered about 50 images and really liked (translation: were going to use eventually) no more than 5 of each stallion. That’s one tenth of one percent of the pictures I took of the studs. Now you know why I took so many pictures.

The important part of this process for me was learning not to care which pictures they fell in love with. I just cared that they fell in love with some. I had no attachment to any of the pictures so whatever they said, no matter how picky and inconsequential it seemed to me (translation: ridiculous) it didn’t matter. I was bullet proof from criticism as long as they liked some pictures of each stallion. This is not as easy as it sounds but it is necessary when you are taking pictures for someone else and you don’t know what they are really going to like.

Okay, now for the hows. Here is the situation. I am inside a paddock with a stallion, two grooms and the farm manager. This is not something I recommend you try. Stallions are fully operational horses if you get my drift. Plus, it is still breeding season so all the stallions are flooded with testosterone. This makes them, like any male in a similar condition, unpredictable and just a wee bit wild. This is why fences were invented. Never go inside the fence with a stallion unless you are prepared to either run for your life or listen to someone who knows the horse better than you do. 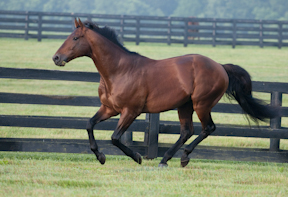 The paddock (a big, fenced pen) is about half an acre in size but because of the late afternoon light I can only photograph about one third of it. Anywhere else the light is either crummy or terrible. The grooms are positioned at either end of the paddock to keep the horse moving. Clifford, the Pin Oak manager stands with me to make sure I don’t do anything really stupid, like walking away from him and to tell me when the horse is not looking right (ears up, tail too high, etc). When I am ready the grooms clap their hands and the horse starts a fast gallop around the edge of the paddock.

I have about 5 minutes to get all the shots I can get. After 5 minutes the horse is too sweaty and the veins on his neck become too pronounced. My Nikon D300s is set on auto white balance, high-speed shutter release, Aperture Priority, Matrix metering, -.3 auto-compensation and continuous autofocus. I have it on Ap. Priority to make sure I get the maximum possible shutter speed. It seems counter intuitive but Ap. Priority will always give me the maximum shutter speed based on the minimum acceptable depth of field. With a running horse I know f5.6 will give me enough depth of field for the horse to be in focus. So I keep it on f5.6 and let the camera pick the appropriate shutter speed. If I were to use Shutter Priority I may be getting too much depth of field (and a slower shutter speed) or too little (what’s the point?).

I am using my trusty Nikon 70-200mm f2.8 ED zoom lens with vibration reduction because I am handholding the lens (Clifford didn’t think a tripod inside the paddock was a good idea). This is a very fast focusing lens and very bright so I have the greatest chance of getting good pictures. I am also using the center autofocus point and composing bigger than I normally would because I am not trying to compose the shot, I am just trying to get the entire horse in the picture, in focus and properly exposed. Everything else I am letting the camera take care of.

As the horse runs circles around me I wait for him to come into the nice light. I am only going to photograph him when he is in the nice light. I don’t care what he is doing the rest of the time; he is not in good light so I won’t take pictures. When he gets in the good light I concentrate on aiming the autofocus sensor on the middle of the horse. This gives me a big target and also gives me the best chance of not cutting of his tail or his front legs. I also watch his ears and his tail as I pan with the horse and listen to Clifford critique what he is seeing. If he is happy and the ears are forward and the tail is not higher than horizontal I hold down the shutter and blast away. If his tail is too high or ears are back I don’t shoot. I don’t need to get volumes of pictures I know I am going to delete. 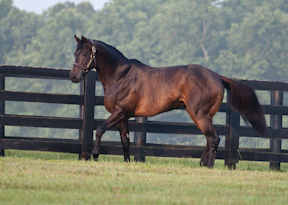 While I am shooting I don’t have the foggiest idea of what I am getting. At 6 frames a second the action is too fast for me to be able to tell if one frame is better than any other. When the horse leaves the shooting zone of nice light I stop, reposition myself and wait to do it all over again. This pause also allows the buffer, which fills up after each burst, to empty and my head to clear and stay in the game. Six or seven laps around the paddock and the horse is done and I have shot 250 to 350 images.

It takes about 45 minutes and 1000 images to do all three stallions. As the horses are given baths and put in their stalls I am in the office downloading the cards into Lightroom to do the initial edit. At this point I am just looking for obvious flaws –misfocus, cut off feet or tail, bad leg position, etc. I am a quick and ruthless editor. Any flaw goes into the trashcan because I know they only want perfect shots. By the time Clifford walks in to the office I have 100 or so images of each horse for him to look at. He reduces the number down to about 20 per horse, which I then do a quick crop and basic processing (a touch of black, clarity, up-exposure) for him to have a closer look and narrow the pictures down to about 12 per horse.

I did this everyday I was at Pin Oak so I ended up with 50 to 60 strong images of each stallion. When the person in charge of Pin Oak’s advertising came over 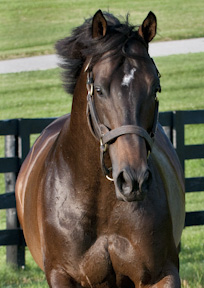 to review the pictures she eliminated all but 5 or 6 shots for each horse. There were many pictures that I thought were beautiful that were never seriously considered because of a flaw I never saw. Oh, well, such is life photographing on assignment.

I just heard from Pin Oak Stud. The powers that be love one shot of their best stud and two of each of the other studs. That’s five shots and five shots is plenty. Oh, there were lots of other, non stud images they liked but I will leave that for my next post.