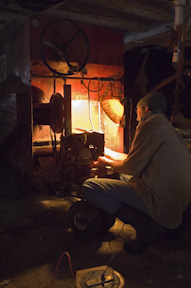 Everyone always thinks about using their wide angle lens in wide opens spaces. It is the traditional use of a wide angle lens- get close to the foreground, include the background and blast away. While this is a great use for this lens it isn’t the only use. I find that I use my ultra wide angle lens (Nikon 12mm-24mm) in ultra close, small spaces as well.

This is also a traditional use of a wide angle lens but most people don’t recognize it. If you have ever seen close photos of people doing something and where they are doing it is clearly shown that photo was taken with a wide angle lens within arms length of the person. This type of photo is called environmental portraiture because it is a portrait of someone and the environment where they are.

You can try this with longer lenses but the longer the lens the farther away from the subject you have to be and thus the less impact the photo will ultimately have. Get in close and you will be amazed at how strong and compelling the pictures can be.

This is my friend Roger fixing the feed cart in his dairy barn. To show both Roger and the feed cart I got right behind him photographed as he repaired it. I used just the available light because I didn’t have time to set up a flash.

Roger again in what he calls the Oil House. I call it, well never mind what I call it. I have always wanted to get a picture of Roger in the Oil House because the environment is so colorful and chaotic. I waited 4 years before I caught him there. He is only about 4 feet away from me but with my lens all the way down to 12mm and my back pressed against the wall I was able to get both Roger and all the stuff around him. 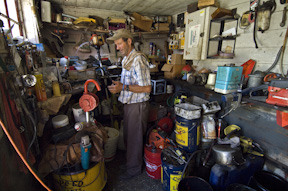