I know that it seems ridiculous to write this but I am having a very hard time getting winter lobstering photographs. Yes I know that you all are thinking that I live in the eastern US and the news has been telling all who listen that the east has been getting nailed with snow. Well, not all the eastern US!

In northern New England we have been having a cold but very dry winter. Here in Vermont we didn’t get any snow from the last two big storms that walloped Washington, Baltimore and Philadelphia. In fact, I have more bare ground around my house than snow-covered ground. 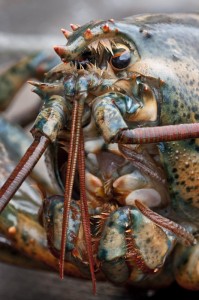 What this means for the Lobstering Life book project is that it is very hard to get winter lobstering shots or I should say wintery looking shots. Wintery shots require snow on the ground at the very least and snow in the trees  at the very best. Without snow the photographs look like a very dreary day in November or April.

So I sit and wait for storms. A week ago I watched the weather maps and dashed off to the Maine coast ahead of the last storm. Forecasts called for 4 to 6 inches but when I got to the coast there was no snow! No snow on the ground, no snow on the trees, no snow in the air, no snow. Arrrggghhh!

So I went to Sanders Lobsters in Portsmouth, NH for a lobster portrait (I had to do something!) and then played with some gear on a private wharf. Both shots are okay but both can and will be done better. I didn’t really have time to shoot the gear properly (the owner of the wharf was standing there waiting for me to finish-can’t blame him, the wharf was slippery) and besides, the last thing we need is another shot of lobstering gear. The portrait was also okay but the background could be better and I think I need to  be off to the side more and not so much in front of the lobster. 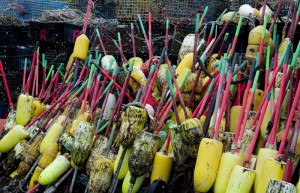 And so now I sit and wait and wait. I came home after just one night. No sense hanging out and spending money when there is nothing to shoot and no weather on the horizon to give me hope. I expect some snow in a week or so. If it comes Brenda and I will go and shoot our collective brains out! Brenda is going to Monhegan Island and photograph that iconic isolated lobstering community and I will go to Vinalhaven (its warmer there) and see what I can get. Wish us luck!  I’ll keep you posted.