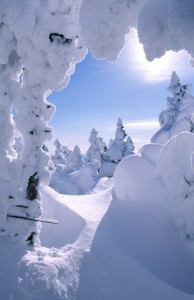 On top of Killington Peak

Tis the season for many of us to go out into the elements and photograph snowy winter scenes. I have done this for years and for many of them I was often disappointed with the images I got. They were perfectly nice and technically fine but there was something missing- they didn’t look wintery even though they were taken in winter. I finally figured out that in order for a image to look wintery there has to be snow on your subject. If you were doing a forest scene there has to be snowy trees with snowy branches for it to look properly wintery. If you were doing animals, there has to be snow on the animals or the animals have to be in a snowy scene (see above). If you were doing anything else there has to snow on whatever you are photographing- fence posts, dories, wreaths, barns, roofs, rocks in streams- it doesn’t matter, there must be an abundance of snow.

Without snow on your subjects the image will often look like winter but it won’t be wintery. There’s a difference- winter is a fact, a statement and bare trees and snow covered ground are the facts of winter. Wintery is an emotion, a feeling and the more snow the more of the feeling of winter, the more wintery-ness, you get. Snow only on the ground is a winter shot. Snow on ground and on the trees is a wintery shot.

So how do you go about capturing wintery images? The best way is to go out either during a snow storm or right afterward. It doesn’t take much time for wind to come up and knock all the snow off limbs and roofs. The other trick is to go out and photograph in the first snow storms of the season. Snow seems to stick better to things early in the season, maybe limbs and bushes and rocks are warmer then, I don’t know but going out during the first big snow storm always works for me. If you have a storm that starts out as rain and then turns to snow those are great sticky snow conditions and even a couple inches of snow will result in wintery pictures.

So be brave and go out in the winter snow and take a few pictures. No one else is taking pictures in winter, they’re all down in Florida taking yet another great blue heron, osprey or alligator photo. You’ll have the place to yourself. Go Nuts!!!